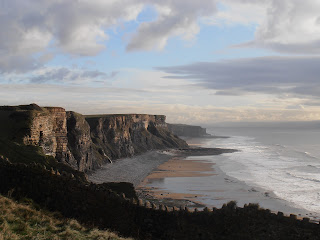 After working 11 hours a day, each day of the weekend, I decided that I needed to make the most of my Monday off. So did I put my feet up and catch up on the Eastenders omnibus? No I went for a very long walk, paying no notice to the fact that the whole of Britain had just witnessed record breaking-ly crap weather. This I eventually paid for.

With 6 months being far too long to wait and the stress of work behind the bar on the weekend still lingering, I thought I would give myself a taster of the trek I am planning. Teilo the terrier scurrying along at my side and lovely blue sky above me, I set off from Ogmore beach and joined the Wales Coast Path.
It was great to be outside after being in that dark bar pulling pint after pint of overpriced Peroni for drunk middle aged men. I wasn't the only one enjoying my freedom. Teilo had just returned home from a weekend in the city being looked after by grandma. 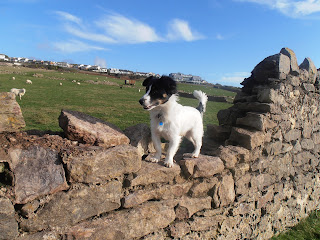 The plan was to walk 15 miles from Ogmore to Aberthin, which is 5 minutes drive from my house and to be home by 4 o clock. Leaving Ogmore at 12:30 we had sun but soon the clouds caught us up from behind and the heavens opened. This was no problem as I had my coat, the problem was that this rain, after the horrendous week that the whole of Britain had suffered, had nowhere to go.
So much mud.
Shuffling, sliding and slipping along from Ogmore to Southerndown beach, then up and over the cwms of Monknash and Nash Point, I passed some fantastic coastline. The cliffs of the Heritage Coast stand at right angles to the sea, sometimes reaching what seemed around 50 meters in height and to add to this the Wales Coast Path skirts right on the edge! I fell twice, but as you can tell by the fact that corpses can't type, I didn't go over the drop. Instead I took two triumphant falls into puddles of mud, each time landing on a different arse cheek. This was about half way into the walk. Teilo escaped by the skin of his teeth each time (that would not be a nice way to go...and would not be an easy thing to explain to mum!).
I trudged on for the rest of the walk looking like I had had  an uncontrollable bowel movement.  Stopping at Llantwit Major to eat my highly nutritious lunch (Mars Bar and two packs of Quavers) I was lucky that, apart from a few surfers there was no one to see the result of my accident that looked like a different sort of accident. I sat and watched them floating about waiting in the brown water of the Bristol Channel, waiting for that never arriving wave.
Either I had watched them for too long, either the mud slowed me down, or my timing is just absolutely atrocious. Whatever it was, I found myself with about another 5 miles to walk, and darkness coming at a faster pace than me. At the rate I was going- tiptoeing around puddles and slipping around like Bambi on vodka and ice it would be pitch black by the time I made it to Aberthaw- my pick up point.
Desperate times call for desperate measures, muddy measures. I was sodden by the time I met dad with the car; my boots squelching with every step and my trousers slipping down with the weight of the mud coating them.
I had a great time, was exactly what I needed to do to unwind. It has however put my walk around the whole of the Wales Coast Path in perspective. Ok, it is getting near mid winter and I will be going around April, but I only walked 15 miles. The complete walk is 800. If I could work that out as a fraction, I would. In April, I won't have a car to chauffeur me to a warm home and a curry followed by a bath- I will have a small one man tent and probably a pot noodle or a Pepperami.
So OK, i've realized it won't be as glamorous as I have been picturing- I'm not put off though. Better that than boring 9-5.

Waiting for the Camino post? You can keep waiting.

Posted by WilliamWelshWalking at 14:13 No comments:

'Why the hell would you want to do that'. That would be the response from the majority of my friends if I told them about my 800 mile aspiration.
I cannot quite say what is luring me to undertake this trek.  I have no idea what kind of person I am to be honest and don't understand most of my motivations. Maybe reading this you will know more about me than I do myself. The fact that the title of this post is a lyric by Craig David I suppose says enough.

I will try to guess at a few of my motivations. I think they are mainly based around, as stated in the title of this blog, the fact that I have absolutely no idea where I am going in life and also because I love the Welsh landscape, and I love the adventure that it can provide, feeling that I really have not made the most of what is on my doorstep.
So, in true adventuring style, I am waiting for the right season to arrive, when it does (April, May?), when I am feeling particularly fed up, bored,useless, possibly drunk, I will walk out of the front door of my house in Llancarfan, south Wales, walk the 20 minutes to the coast, turn left and keep walking for two months in a loop around Wales, until I arrive back where I started.
While I am typing I find myself eagerly looking to my right out of my bedroom window in the direction I will be heading. I want to go now, curses to our British seasons!

I suppose I should introduce myself.


I am William. I am 22 years old. I hail from a tiny village outside Cardiff. I have moved once- next door. That is not to say I haven't left home at all, I did, I just eventually found my way back.
I went away to England, studied a History degree and a Master's in International Relations (both entirely interesting, both entirely useless) returned home for the summer and this is where I remain. To say I am unsure about my career direction would be a somewhat understatement. With my employment experience it is no surprise.

Now, after signing up for the dole, applying to various obscure jobs (these include kayak salesman, toystore overnight warehouseman, Brecon Beacons park ranger) I now find myself working full time behind a bar for minimum wage. This would be the perfect time to say 'thanks Gordon Brown', but it isn't the politicians' fault. I have chosen this, I am avoiding going into my lifetime career because I don't yet know what it is. So why rush into things? I don't want to end up doing something I hate. So I will fulfill my expectations as a man and leave all that til later. In the meantime i'm going to just walk around Wales.


Ah dear, the words of a man running away. The worst thing is, i've done this all before, as my girlfriend told me, 'you are the Forest Gump of walking'. So my next few blogs will explain these little trips of enlightenment. I'll show you how I got into all this walking malarky, detailing two key moments- walking Offa's Dyke path and the Camino de Santiago.

Posted by WilliamWelshWalking at 07:05 No comments:

WilliamWelshWalking
I have two aims. Maybe three. To be honest I do not know what my specific aims are. I am 22 years old, I have a first degree and a Master's yet I am now working behind a bar. What my aim in life is I do not know. All I know is I want to walk around the whole of Wales (800 miles), I also want to write a book along the way. Ok there we go, two aims. This blog's intention therefore, is to describe my build up to this trek; explain why I want to do it and hopefully give me some practice for the book I intend to write along the way. Dont get too comfortable though, I might throw in some completely unrelated musings.